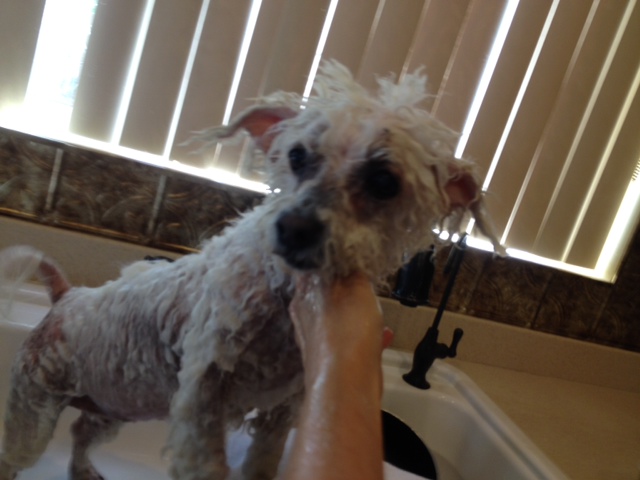 Finally, after a long session of brushing and combing the tangles and debris from her fur, Chelsea had been shampooed. I rinsed her obsessively because her skin is sensitive. She has been groomed professionally for almost 13 years. Obviously, her skin was not always vulnerable. Could it be her age? I say certainly not. My skin is fine, and I’m… uh… mature.  Am I in denial? Yes! You heard me deny it. I shall continue to deny it. 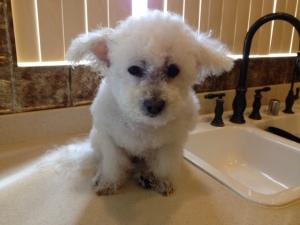 Chelsea is a sweet puppy. She acts like a puppy so I call her one. I’ll admit that her expression in this photo says that life is tenuous at this moment. “What is the world coming to?” she wonders.

We had to wait until her fur dried, which in Arizona doesn’t take as long as elsewhere. While we waited, I groomed her with brush and comb again. Yes, again. I had watched a video of a Bichon Frise being groomed. The procedure included brushing and combing the fur completely before shampooing! After shampooing and rinsing, the next step would have been blow-drying, brushing, and combing again. Chelsea and I both found this business very taxing. I omitted the blow-drying part. Her fragile skin doesn’t need to be blown dry. I also omitted shaving her behind. This procedure, although revealed on the Internet as often done by groomers, was not shown in the video. We believe shaving the bottom was the source of Chelsea’s distress the last several times she was professionally groomed, so I carefully cut the fur short with shears in this area. Shaving may be less troublesome, but for Chelsea, not shaving her skin was probably the most important change I made. Shaving may be appropriate for other dogs, but for Chelsea in her latter years it stopped working. We do not blame the groomer. This was the time for me to take on this project.

Chelsea is a trooper. Her strength lasted until we were finished. Her energy resumed in full form as soon as we finished. See! Puppy!

We have purchased a special clipper that has a sensor which tells at which position it is safe to cut the dog’s nail without disturbing the quick. I hope it is accurate. I also read that if the nails have grown very long, it is best to clip only a small portion at a time, and to do it once a week instead of once a month until the quick has retreated. So, if the quick retreats, it apparently extends as the nail grows very long. I will keep that in mind. I will be cautious. We plan to engage in this new project soon. Very soon.