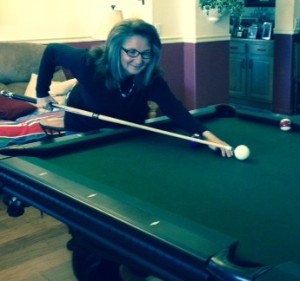 My husband Steve took this photo while I posed. When I first met Steve last June, he was in the middle of remodeling our living room. His plan was to turn this space into a game room. First he replaced the carpeting with a saddle-brown-hickory-colored engineered hardwood floor, which he installed himself. Next he purchased the pool table, which a crew of trained men carried in and assembled. Now we enjoy playing pool everyday. Notice that there are no shadows on the pool table, making it possible to see clearly when shooting. It was NOT brightly lit up this way until yesterday. There was a chandelier hanging from the ceiling, but it shed no light on the pool table.

Three days earlier Steve had started his latest project: Moving the chandelier. I came home in the afternoon to find this contraption in the driveway, which Steve said was a scaffold he had constructed, because he needed to reach the high vaulted ceiling in the game room to move the chandelier! He explained that as soon as he finished building the scaffold and checking it out for safety and utility, he would have to deconstruct it, board by board, and carry all the pieces into the house and build it again. Really! I asked him if he knew before he began that he would have to take it down and build it again. Yes, he knew. Not only did he know this, he also knew he would have to take it apart again to remove it from the game room. After altering the height of the walkway from 8 feet to 6 feet, it was ready to be taken apart and carried inside.

Here is the scaffold, 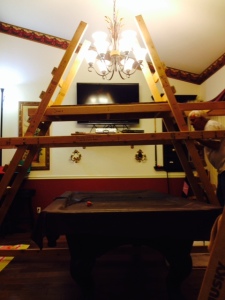 positioned over the pool table, with the chandelier dangling from the ceiling. It was time to deconstruct. Taking the scaffold apart without causing it to crash into the chandelier was an issue solved by prayer and careful maneuvering.

Steve finished the job late last night. We played our first game of pool with proper lighting over the table.

We have a very creatively swagged chandelier, which allowed us to bring lighting over the pool table for a very small monetary investment. Labor, well, yes, there was labor, but Steve didn’t mind. He is already looking for his next project.

The new me - Carol Ann. More suitably said, the old me in new circumstances of life. Again. My history has developed in parts and chapters. In person, I am Wife, Mom, Grandma, Author, and Writer, in that order, more or less. Life is good because God is good.
View all posts by Carol Ann Hoel →
This entry was posted in Humor, Memoir and tagged Billiards, Building Scaffold, Chandelier, game room, investment, labor, Light Fixture, living room, maneuvering, Pool Table, remodeling. Bookmark the permalink.