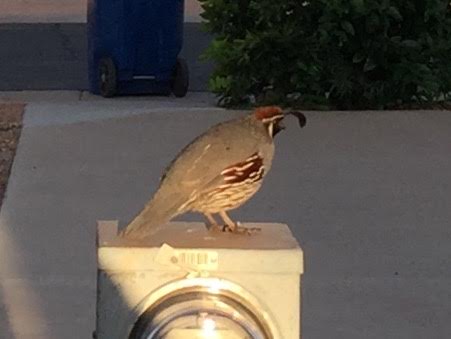 Our first sighting of Gambel Quail occurred on March 5, 2016. There were four of them and they were strutting about with those curly things protruding from their heads, poking the ground with their beaks, darting back and forth. It was funny to watch them.

I immediately ran for my Peterson bird guidebook to find a photo of these hilarious fowl. It didn’t take long to find out they were Gambel Quail. These birds apparently travel with their mates and sometimes several pair show up together. We saw them again on April 6.

Neither Steve nor I had ever seen one of these colorful birds before. That curved thing jutting out from its head is not a beak. Look closely and you will see a tiny beak below. I want to share how I happened to get this photo. Doesn’t it look like it posed for me? I believe it did. Here is how it happened.

The day was April 9 at sunrise. Steve and I were drinking coffee and looking out the window when we spotted a pair of them dancing across the empty camping spot next door. I told Steve how my favorite time of day while tent camping years ago was the crack of dawn when I’d plug in my coffee pot in the electrical receptacle provided and watch the creatures play in the woods. I decided in the spirit of our conversation to go outside on our patio with my coffee. The air was chilly, but I didn’t care.

While I was sitting there, one of the Gambel Quail landed on the electrical box at the end of our campsite. I always have my iPhone with me, so I snapped a shot from where I was seated, then another and another as I approached this posing bird. It remained perched there until I was very near. This photo is the last of the series.