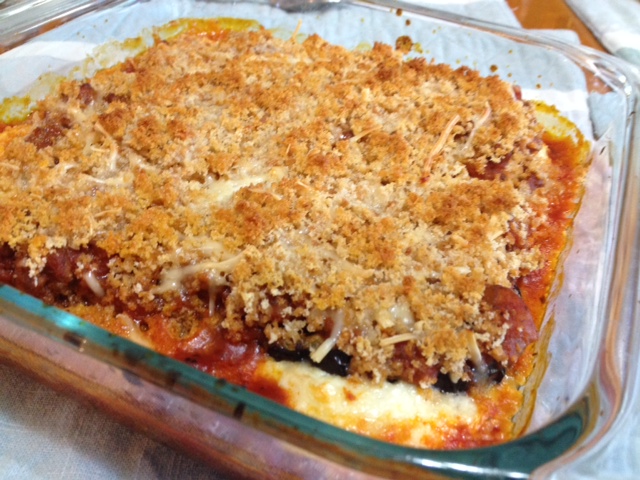 While looking through my vegetable bin, I saw an eggplant. Why, oh why did I buy an eggplant? Do you ever buy food because it looks good and when it comes time to prepare it, your enthusiasm isn’t there anymore? This is what happened to me. This eggplant was going to be part of our meal somehow, some way. I went to my favorite recipe site and found a recipe entitled Eggplant Parmesan Casserole by Chef John. I watched the video.

Like most cooks, I made alterations, but not because I thought my changes would make it better. I had already thawed two sirloin beef patties. I was looking for a way to prepare them when the eggplant caught my eye.

I used most of ingredients the recipe called for except for adding ground beef to the skillet with the diced eggplant and garlic slices. Also, I substituted Hunts Four Cheese Pasta Sauce for marinara sauce. I increased the sauce to accommodate the ground beef addition. I used grated asiago cheese instead of pepperjack in the cheese mixture. I also made my own bread crumbs from two slices of gluten-free bread, and rather than adding oil to the bread crumbs and Parmesan cheese, I added melted butter.

I increased the amounts of cheeses in the recipe, so I had too much cheese mixture to stuff into folded eggplant slices. Instead, I made two layers of the sliced eggplant with the cheese mixture tucked between the layers of eggplant. The sauce I spread on the bottom of the baking dish and on top of the eggplant/cheese layers. I applied the bread crumb mixture on the top of it all.

I baked it exactly as instructed. I covered the top with foil for about half of the cooking time to be sure the topping didn’t burn. I cooked it 40 minutes until the sauce was sizzling and the top was brown.

It was delicious. I may make it again the next time I can’t pass up a beautiful eggplant in the produce aisle.