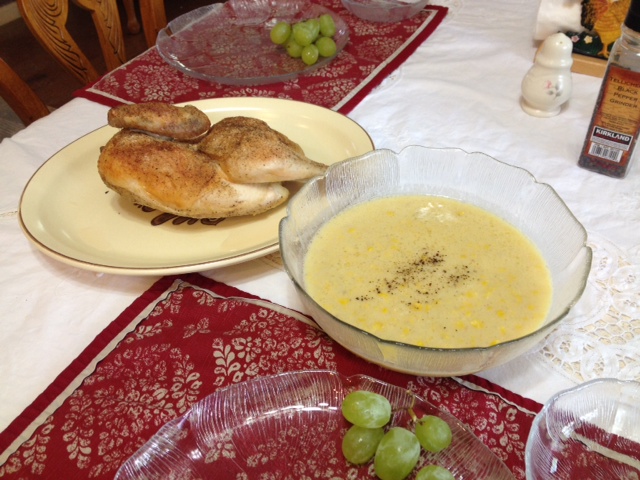 Do you ever feel that way? No cooking today! How did I manage other than going out to a restaurant, which, I confess, we do too often? 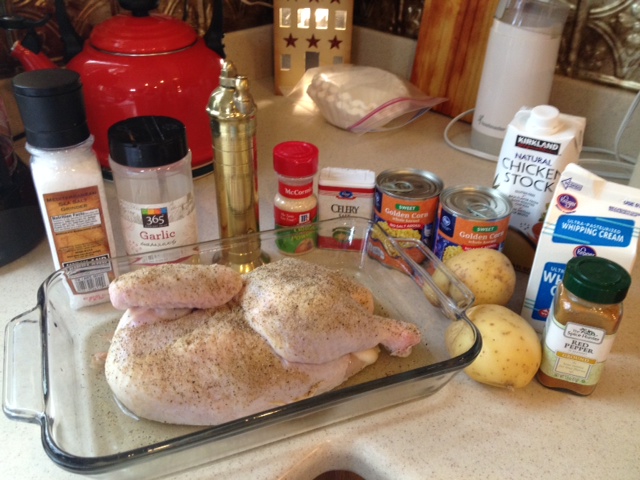 All ingredients for meal are in this photo

First, I chose meat the oven could cook while I did something else. I stuck half a chicken in a baking dish, salted, peppered, and sprinkled it with garlic powder, added a small amount of water in the bottom of the pan, and put it into the oven to bake at 350 degrees F. not expecting to look at it again for an hour. CHECK. (It wasn’t done yet. I added another 10 minutes.)

I chose corn chowder made the easy way. If I’d had canned potatoes, I’d have used them, but I had to peel two medium potatoes and cut them into cubes. That took six grueling minutes, but I got through it. CHECK.

Be careful when your heart’s not in cooking. It’s a time to chop fingers instead of the potatoes, but I made it through without incident.

Next, I poured packaged chicken stock over the cubed potatoes and turned on the heat to medium. I cooked them until tender, added one small can of whole kernel corn, onion powder, celery salt, and red pepper, and simmered a while longer. CHECK.

The next part I nearly decided not to do. But bravely I poured the soup into my trusty, old blender (I’d have to wash it afterward, you know), and churned it up a little, returning it to the cooking pot for the final touches, adding cream and additional corn. The entire second can went into it. CHECK.

One last addition to the chowder was the broth from the bottom of the chicken pan. This added rich flavor. You could omit this step to avoid chicken fat, and it would still be good. I personally love chicken fat. Stir and serve. CHECK.

I added one more food to our meal, fresh green grapes.