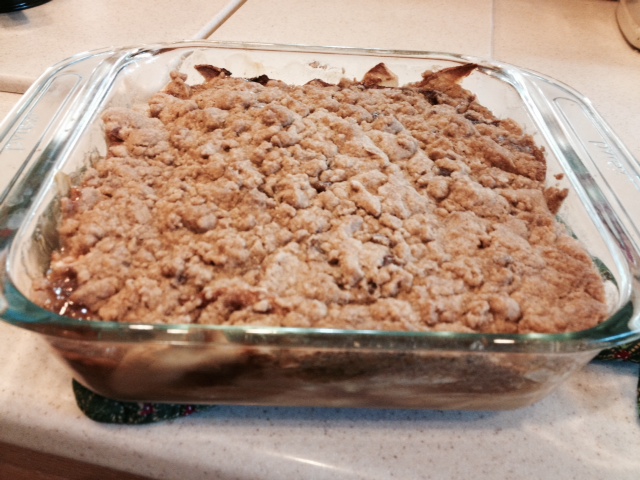 Shopping for groceries, I pushed a cart through the produce area looking for vegetables. I found celery, cabbage, broccoli, cucumber, and tomatoes, enough for a few days. I looked around for Steve, but I couldn’t find him.

Just around the corner from produce was the bakery where I found Steve holding a single slice of apple pie, staring at it as though he needed to open it and eat it right there.

Steve strongly supports me in my new wheat-free journey. He doesn’t expect me to prepare foods made from wheat, and I do my best to make tasty foods without wheat. I don’t try to keep Steve from eating wheat, even though I think it is not good for anyone. When we go out to dinner, Steve eats wheat and enjoys it.

When I saw that he was longing for an old-fashioned wheat-based pastry, I offered to bake him an apple crisp. He smiled and put down the apple pie slice. As soon as we got home, I took the apples out of the fridge and started to prepare apple crisp.

Steve is enjoying his bowl of apple crisp and ice cream right now as I type this post.

The new me - Carol Ann. More suitably said, the old me in new circumstances of life. Again. My history has developed in parts and chapters. In person, I am Wife, Mom, Grandma, Author, and Writer, in that order, more or less. Life is good because God is good.
View all posts by Carol Ann Hoel →
This entry was posted in Food, Memoir and tagged allrecipes.com, Apple Crisp, apple crisp recipe, Apple Pie, Apples, Cooking, Dessert, Gluten-free Apple Crisp, Gluten-free pastries, grocery shopping, ice cream, my gluten-free journey, Wheat based pastries. Bookmark the permalink.