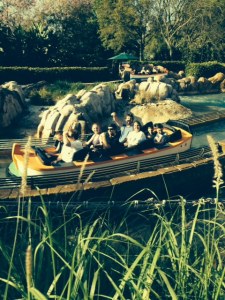 My husband and I flew to Florida to visit my family. We met with the whole gang, and we all went to Sea World, Universal Studios, and spent a day at New Smyrna Beach on the Atlantic.

Let me share a few highlights, for instance, how my family tried to persuade me to go on the Atlantis ride at Sea World. They had tricked me into riding it a few years ago. On that occasion, right before the boat plunged over the straight-down drop, I asked if the ride was over. What a bunch of smirking liars! Almost, they’d said to me simultaneously, trying not to reveal the surprise I was about to experience, and then we went over the edge and crashed into the water. We were all soaked. This time they had to ride it without me. Steve and I stayed dry. Thank you very much.

Steve, my playful husband, rode four roller coasters during our week in Florida. I stayed on the ground. One time I agreed to watch two toddlers, one asleep in her stroller, and the other wide awake, while all the others went on the ride. These babies were my granddaughter’s friend’s children, her two-year-old boy and a toddler girl she was babysitting. As I sat on the bench with the two strollers in front of me, four people sitting beside me noticed how cute the little boy was, as he laughed at me while I tickled his leg. Finally, one of them asked me what the boy’s name was. Oh, I knew this was going to be embarrassing. I don’t make a habit of lying, but I did try for a moment to think of a name. Any name. But I couldn’t think of anything but the truth, so I told her that I didn’t remember his name. You can imagine the horror on the faces of those four people. They thought they’d caught a kidnapper red handed. I explained, and they seemed to accept my story, which, of course, was true. Duh. I had been told both of the children’s names, but I’m not good with names. It takes a few repetitions before I remember.

We did other things besides theme parks and beaches. We played pool at the local bar called Frank’s Place. Steve and I were holding a pool table waiting for the rest to arrive, but they were late.

My daughter’s friend’s car had been reported stolen a few days earlier, then recovered, but not by the police. No one had thought to notify the police that the car was back with the owner. The quick-to-act officers, on sighting the assumed stolen car, pulled the owner of the car over with my family members, three of them, inside! The officers surrounded the car and commanded them all, at gun point, to get out of the vehicle. Despite all their efforts to explain, the officers, handcuffed them, with the exception of my 12-year-old grandson. They first frisked him and then let him stand aside and watch. I had been praying for them, because they were quite late in arriving. Therefore, I shall gladly give God the credit for the favorable outcome. They were all cleared on the spot and allowed to proceed unshackled to Frank’s Place, where we were waiting for them. We all laughed about it, as we dined and enjoyed the rest of the evening.

Chinese chicken is cooking in a pot on the stove as I write this post. I haven’t made this dish in many years. I hope it turns out well. It smells good, and the broth tastes right. I just added hard boiled eggs. The original dish calls for quail eggs, but I am using chicken eggs.

Time to cook the rice. Ah, I tasted a mushroom. Delicious! I think I have successfully cooked this dish. I hope Steve likes it. We are glad to be home, but I miss my family already.