The Bichon with Attitude

Look at her mug shot. The Bichon with attitude. I know it’s too soon for another dog post, but I can’t help it. I have to tell her story. First, she knows I like her. Dogs have a sense about that. It doesn’t matter how much you pet a dog, if you don’t like the dog, it knows. I like her, and she likes me, so this is not about jealousy or strife.

This is about Chelsea’s habits. What would you think about a dog that clamps her teeth around the stuffed toy you bought her and shakes it until her teeth make a breach in the cloth? Yes. Chelsea performs this ritual on all her toys. After the breach has been accomplished, she shakes them until the stuffing comes out! What does her owner, my hubby, do about it? He says to me playfully, “She’s killing another one.”

Here is another Chelsea trait. This one is really darling. When I put our food on the table, and we sit down to eat, as soon as Steve begins to say a prayer of thanks, she starts whining loudly, then barking, then whining louder until he says AMEN. (I recorded her doing this, but I have been unable to upload the video on my blog.) Once the praying stops, she continues to whine until Steve gives her food. You cannot blame a pooch for begging for food, can you? Certainly not.

What about this? When it’s time to watch TV, Chelsea checks out what we are watching. If there is anything on the screen that disturbs her, she barks furiously at it until the scene changes. You would be surprised how often Chelsea disapproves of what we are watching. We ignore her. After all, she is a doll, and she truly is. 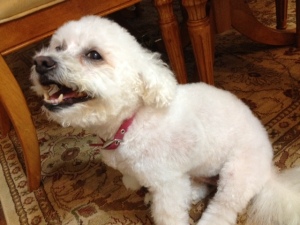 This morning, I could not contain myself. Steve and I were sitting on the couch speaking with one another. She didn’t like not being included in the conversation. We knew this even though she didn’t tell us in words. She barked like there was a roaring bear staring her in the face. Finally, I turned and looked right at Chelsea and screamed SHUT UP! She stopped barking immediately and perked up her ears with a questioning look on her face. I looked back at her and smiled. She is SO cute. How could I not? She pranced over to me and demanded a reassuring pat on the head, which I gave her. Steve and I started up our conversation again, and Chelsea began barking again. Yes. We talked louder and she barked louder. Ha! Chelsea rules! Yes! A spoiled rotten Bichon lives here! But she is TOO cute!

12 Responses to The Bichon with Attitude